Effect of Decentration on Power Profiles of a Refractive Lens 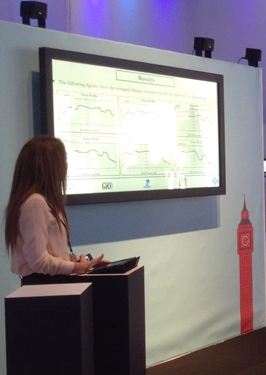 Several designs of soft multifocal contact lenses are currently available in the market to serve the aim of functional vision in a range of distances.  Soft materials are popular in the construction of contact lenses due to the comfort they provide and the high values of Dk they offer. Nevertheless, a problem that frequently arises is the stabilization of the lenses when they are fitted in the eye, which affects the centration, and hence it can affect the visual outcome, especially in the case of a multifocal contact lens. In the XXXII Congress of the European Society of Cataract and Refractive Surgery, September 2014 in London, an electronic poster was presented by Eleni Papadatou (Image) which assessed the in vitro changes on power profile of a simultaneous vision designed, refractive zoned multifocal contact lens for different degrees of decentering (from 0.0mm, aka centred position, up to 1.00 mm) and evaluate the effect in the optical outcome. The results demonstrated that the decentration led gradually to a shift on the power profile of the lens, which was lacking its symmetry as the decentration increased. That means that for a fixed pupil size the combination of powers was different at every step of decentration, which indicates that pupil size plays an important role when the lens is well centred. Thus, the optical outcome at decentred conditions seems to be more dependent on other, non-fixed factors such as the intraocular suppression ability, which varies between the individuals and finally, may enhance or deteriorate the visual outcome.