Physicians in ancient Persia played an important role in the development of medicine in the medieval era. One of the most influential figures of this era was Avicenna. Few researchers have looked into the different medical issues in his best known work, the Canon of Medicine, particularly with regard to ophthalmology. In this analysis, Avicenna’s views on and contributions to the diagnosis and treatment of cataracts in his Canon were elucidated.

According to the Canon, cataract is an obstructive disease in which external moisture accumulates between the aqueous humor and the corneal membrane and prevents images from entering the eye. Avicenna classified cataracts on the basis of size, density and color. According to size, he identified two types of cataracts including complete and partial obstruction. According to the Canon, surgical intervention was necessary only for certain indications. Avicenna believed that opacity in the initial stages of cataract could be diminished by medicines and foods, and described several medicines for cataracts. He believed that surgery should be postponed until the liquid accumulation stopped, and the cataract reached its mature state. After surgery, according to Avicenna, the patient should avoid headache-inducing situations because headaches could lead to edema of the layers of the eye. He further emphasized that the patient’s psychological status played an important role in the success of surgery. 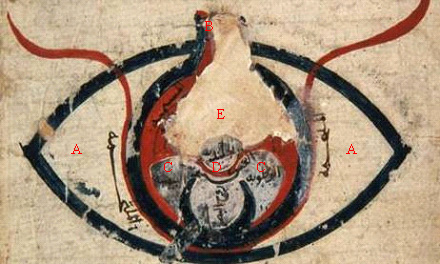 Figure: This illustration from the Resaleh fi-alein shows the normal anatomy of the eye according to Avicenna. A, Conjunctiva; B, Optic nerve; C, Aqueous in anterior chamber; D, Aqueous in posterior chamber E, Vitreous.

Avicenna and Cataracts: A New Analysis of Contributions to Diagnosis and Treatment from the Canon