The annual meeting of ARVO took place this year in Seattle, USA (1-5 May) and its theme was "Research: A Vision for Hope". This meeting is the largest gathering of vision researchers worldwide and more than 10.000 attendees from all over the world participate each year.  The meeting encourages connections among scientists and vision experts to explore cutting-edge basic and clinical eye science.

This year, I had the opportunity to participate in the meeting and present a poster with results from my work. My poster was focused on the results of the research I have conducted for a series of multifocal intraocular lenses regarding their in-vitro optical quality (MTF measurements, straylight measurements).

The poster session was a very positive experience which gave me the opportunity to interact and discuss with fellows about my work and to make connections with researchers working on the same field. The feedback I got from those connections was very useful for my research and it will help me to improve and take under consideration new parameters.

Eleni Papadatou at her poster presentation in ARVO 2016, Seattle, USA.

ESR10 studied the optical and visual quality of combinations of corrective elements (intraocular and contact lenses) in his secondment in Wroclaw University of Technology in Poland. In this study, topographic data from real subjects were used retrospectively in order to simulate real corneas in theoretical eye models. Then, in these models were designed intraocular and contact lenses, either customized or optimized ones and the visual and optical quality of the system was accessed.

This work was presented in ARVO 2016 congress, in Seattle, USA (figure 1).

The same project is now being studied with diffractive multifocal intraocular lenses.

(For access to the poster, follow the link or contact at This email address is being protected from spambots. You need JavaScript enabled to view it. )

As part of their training and aiming to promote the cooperation between the academic and the private sectors, some of the AGEYE fellows completed a placement at Optegra Manchester. Optegra is a global private hospital group that offers ophthalmic services in the United Kingdom, China, Germany, Czech Republic and Poland. They are pioneers in eye health care and leaders at the forefront of the ophthalmic field with an important R&D department.

During their placement, the fellows have been able to understand the day-to-day business at a private hospital such as Optegra, visit all the hospital’s facilities, to attend to some of the surgeries that are usually performed as well as accompany some of the eye care professionals during their daily basis duties. Moreover, in collaboration with the R&D department, some of the fellows are analysing data provided by the hospital in order to write scientific articles to be published in peer-reviewed journals. 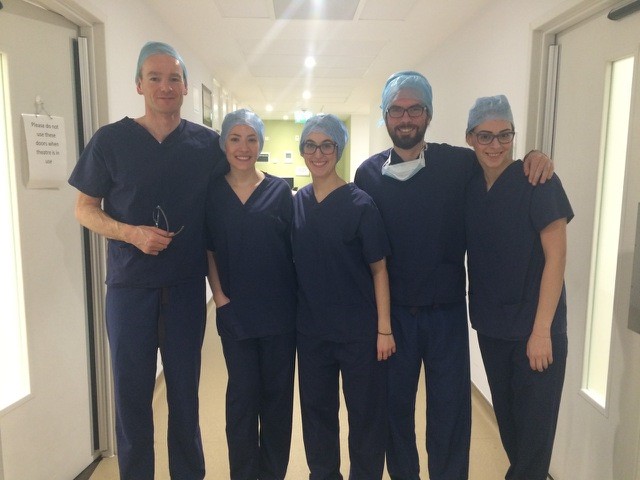 The 24th international congress of optometry, contact lenses and ophthalmic optics – OPTOM 2016, was held between 8 and 10 of April 2016 in Madrid, Spain. More than 1000 opticians, optometrists and scientists working in the field were brought together to present their works and discuss on future horizons.

Ageye project and GIO group was represented there by members of both teams. Two posters were supported by Ageye ESR10 Zoulinakis Georgios, entitled as:

Both posters describe parts of the general project entitled “Optical Impact of Correcting Elements” which will be defended by the ESR 10 in 2017.

Background: Life’s expectancy increment will lead a great part of the population in spending almost half of their lives being presbyopes. Spectacle correction is the most common solution for presbyopia compensation but current lifestyle and aesthetics drive new presbyopes to other correcting techniques. Simultaneous vision multifocal contact lenses seem an appealing solution although the fitting rates are still relatively low.1 The concept of these designs is the projection of both in-focus and out-of-focus images at the same time and their success relies on the visual system’s ability to suppress the blurred out-of-focus images (regarding the viewing distance).2 Under in-vitro experimental conditions, power profiles3,4 of these lenses can give important information about the power distribution across their optical zone.

Study: In this study, we studied different types of simultaneous vision multifocal contact lenses (center near and center distance designs, different addition powers). By using a power mapping device (NIMO TR1504, LAMBDA-X, Belgium) the power profiles of the lenses were obtained for a 6 mm pupil size. Based on their power profiles we calculated the proportions of power distribution for different pupil sizes, i.e. 3 mm, 4.5 mm and 6 mm (Figure 1).

Figure 1: power distribution (%) of a center near multifocal contact lens at three different pupil sizes. The nominal power of the lens was -3.00 D.

Additionally, we divided the power profiles into different distance zones (far, intermediate and near with respect to the nominal power of the lenses) and we calculated the proportion of the area of lens’ surface dedicated to each zone as function of pupil size (Figure 2).

Figure 2: example of calculation of the area of the lens dedicated for near zone (right figure) as a function of pupil size. In this case the lens is of center near design. In left graph, which illustrates the power profile of the lens, the dashed lines indicate the thresholds between far, intermediate and near vision zones (in respect with the nominal power of the lens which was -3.00 D).

Summarizing, the two basic findings of the study were that the resulting refractive power at a given pupil size relies on the design of the lens and its addition power and that all the 3 lenses types we studied, regardless their design, enhanced intermediate vision at moderate pupil sizes. This study has been submitted as an original paper work and is currently evaluated by a peer reviewed scientific journal.