In order to design this type of lens in an optical design program we need to create this pattern on an IOL surface. For this, we developed a code in Matlab R2012b (The Mathworks, Inc.). With this code we can create the surface we want (Figure 1a) and control all the parameters like curvatures, asphericities, diffractive parameters etc. The code produces a text file of point coordinations that can be inserted into the software in order to be simulated and ray traced.

We have checked that the code creates correctly spherical/aspherical lenses that have same simulations as the ones from the software. After that we have been able to design diffractive IOLs (bifocal) which when simulated in the software.

Soon we will be able to advance it even more and produce a database of diffractive IOL simulations of different architectures. 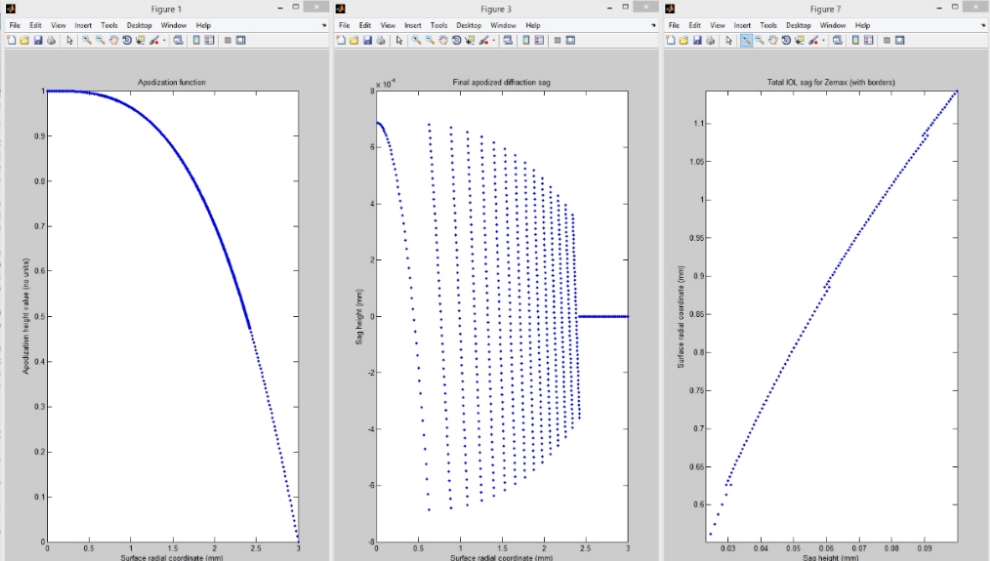 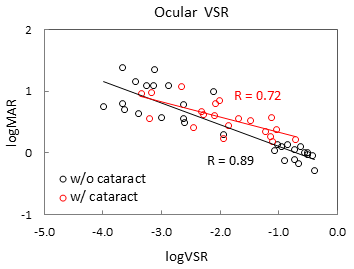 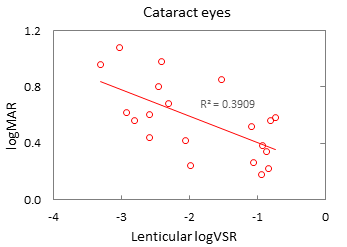 We presented the results of our most recent study about the influence of the longitudinal chromatic aberration on the depth of field during the ARVO 2015 conference in Denver, CO. 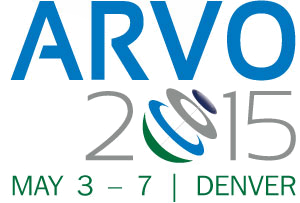 If the eye is focused at a given distance, then objects located either nearer or further away will produce blurred images on the retina. Although theoretically a perfectly clear and in-focus retinal image is formed only when the object is precisely optically conjugate with the retina, a slightly defocused image will also be interpreted in this way by the brain as long as it is positioned within the optical extent of the depth-of-focus (DOF). Related to the DOF is the depth-of-field (DOFi). It can be defined as the „projection of the dioptric interval of the depth-of-focus into free space”. The observer is unable to detect blurring of objects within this interval and perceives them with maximum visual acuity.

The longitudinal chromatic aberration (LCA) is the dependence of the refractive power of the eye with wavelength and is one of the important cues for the accommodative system that affects its response and accuracy. 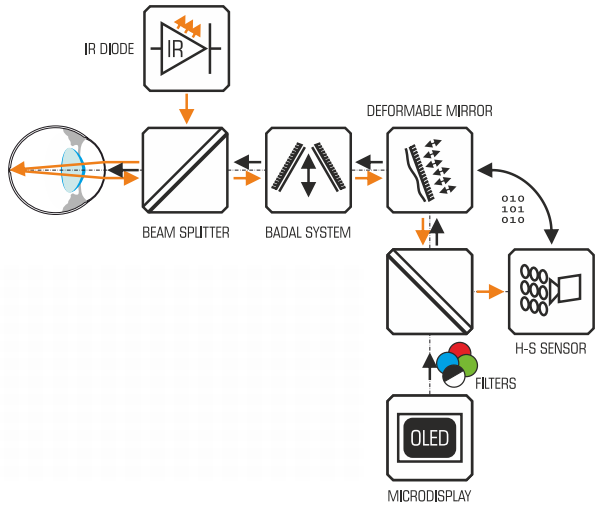 We measured aberrations of 7 young subjects while showing them a target at 3 different distances to make their eyes accommodate. We used a custom­-made adaptive optics system equipped with a 1024-lenslet Hartmann-Shack sensor, a deformable mirror (Mirao 52­e, Imagine Eyes), and a Badal system controlled by the subject. The target was presented on on an OLED microdisplay that was covered with color filters. 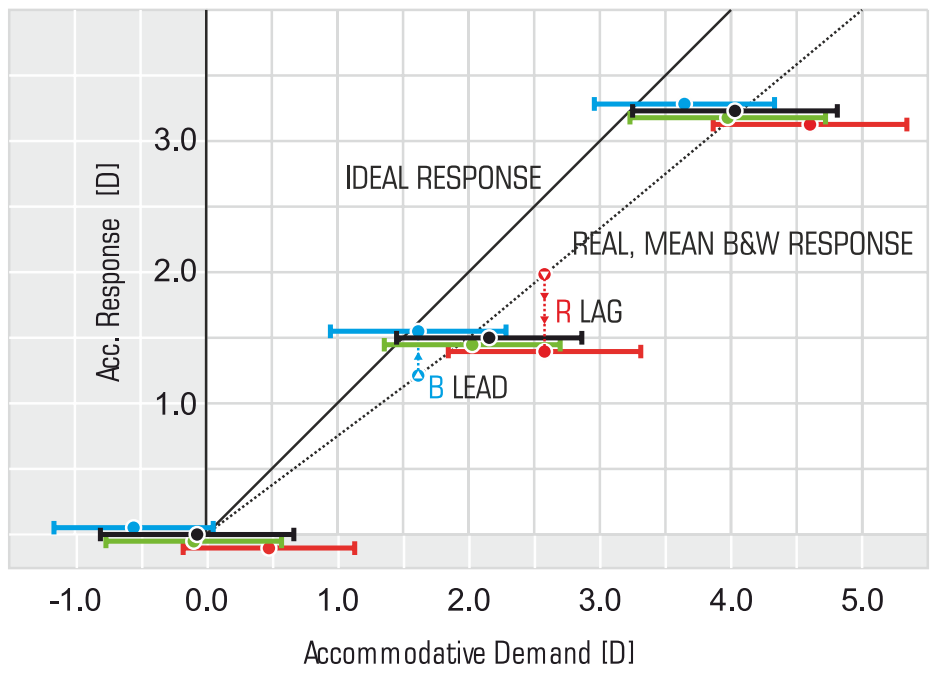 The figure above shows that there is no difference between the eye's response to B&W and green stimuli. The DOFi extend in these cases right up to the „ideal response” line. This confirms the statement that the eye accommodates only the minimum amount, enough to place the target within its depth of field and see it relatively clearly. The fact that the LAG and DOFi for polychromatic stimuli don't differ from those for monochromatic green indicates that they are not influenced by the presence of the LCA.

Apart from these factors, DoF has been found to be influenced by a neural factor associated to subjects’ blur sensitivity and that could be responsible for the large differences between objectively and subjectively measured DoF, and for the wide variability among subjects.

There exists a controversy when it comes to the mechanism and significance of the fluctuations. It is still uncertain whether they simply represent a background noise of the accommodative system or play a role in the accommodation steady-state, maintaining focus and retinal contrast whilst fixating on a fixed target. Therefore, studies that look into the impact of microfluctuations of accommodation and other higher order aberrations on the retinal image quality are warranted on a large age range of patients to understand their role in the eye further. 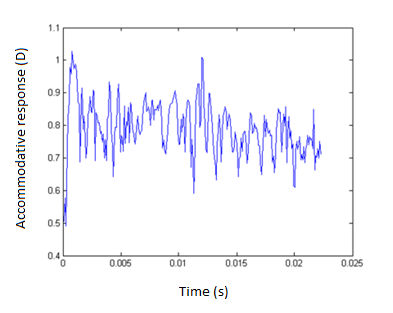