Alejandra Consejo, Early Stage Researcher of the Ageye Marie Curie ITN has recently been awarded the EYRA (European Young Researcher’s Award), sponsored by EuroScience. EYRA 2017 is to recognize PhD graduates who defended their PhD in 2017 who, in words of the organization, ‘have demonstrated an outstanding research performance, leadership and outreach and have incorporated a clear European dimension in their research’. The International Selection Committee for the European Young Researchers’ Award 2017 appointed Alejandra as a co-winner of this year edition. The prize-giving-ceremony will be held in July 2018 at the EuroScience Open Forum (ESOF) in Toulouse. 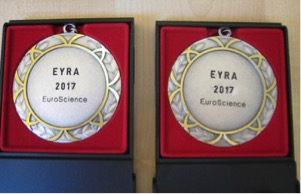