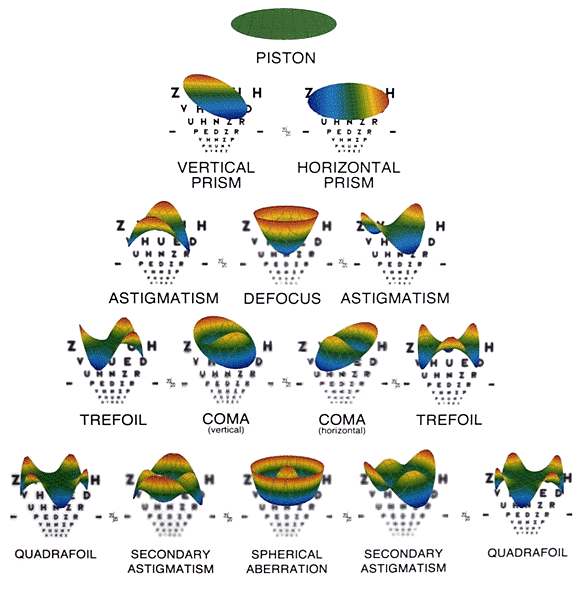 The image-forming properties of the eye can be fully described by the wave aberrations. The wavefront error of the eye can be described by normalized Zernike polynomial (ZP) expansion. This expansion is widely used in optics because ZPs form a complete orthogonal basis on a circle (e.g., pupil) of unit radius and with few coefficients, it traces an entire wavefront aberration (WFA) map. In one study (Marsack et al., 2004), it has been shown that the visual Strehl ratio (VSR) metric accounts for 81% of the variance in high-contrast logMAR visual acuity (VA) which makes this metric a strong predictor of visual performance in normal eyes. We apply this method and investigate the correlation between the VA and the VSR of the eyes with cataract. The VSR metric is calculated using the modulation transfer function method (VSMTF). The WFA of the eye will be measured by SCHWIND SIRIUS (Scheimpflug Analyzer). We measure the ocular and corneal monochromatic WFAs and obtain information on the intraocular WFA by subtracting the corresponding ZP coefficients.

Figure. This chart reveals lower order aberrations (LOA) created when a WF of light passes through eyes with imperfect vision. A theoretically perfect eye (top) is represented by an aberration-free plane known, for reference, as piston. (Image: Alcon Inc.)